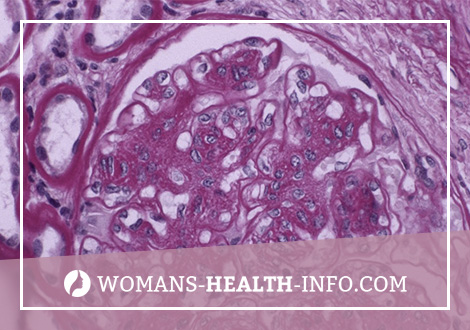 One of the urgent tasks in the diagnosis of diabetic glomerulosclerosis is the recognition of diabetic microangiopathy in the early phase of development, when pathogenetic therapy is appropriate and can be effective. Some authors point out the value of a kidney biopsy for the early diagnosis of the disease (A. M. Wiecher, R. M. Sokolova, 1972), although this method does not give positive results in all patients (in 70-90% of cases).

In the diagnosis of preclinical forms of diabetic nephroangiopathy, the determination of glomerular filtration is essential, which decreases long before the onset of clinical symptoms. The use of renography makes it possible to judge the state of the secretory-excretory function of the renal tubules, the renal blood flow, as well as the magnitude of glomerular filtration (V. D. Malinkevich, 1973; V. N. Slavnov, A. S. Efimov, 1971).

According to A. S. Efimov (1990), the earliest and most informative test in the diagnosis of preclinical manifestations of diabetic nephropathy is a change in the secretion of magnesium — a decrease in its clearance and a distortion of the circadian rhythm. Radionuclide methods are highly informative in the preclinical stage of diabetic nephroangiopathy (3. S. Mehdiyeva, 1989). At the same time, it was revealed that diabetic nephroangiopathy already at early stages is characterized not only by glomerular, but also by tubular disorders, more pronounced in insulin-dependent diabetes.

The clinical expression of increased permeability of glomerular membranes for plasma proteins is proteinuria. Without diminishing the value of instrumental and laboratory research methods, one should not forget about the importance in the diagnosis of diabetic glomerulosclerosis of a carefully collected history, which allows to clarify the duration of diabetes, the time of appearance of proteinuria, hypertension and edema. According to N. F. Skopichenko’s observations, diabetic glomerulosclerosis in the first (initial) stage can be diagnosed if there are a triad of symptoms in patients with diabetes: proteinuria, retinopathy and arterial hypertension.

It is difficult to diagnose diabetic glomerulosclerosis in the elderly, as they can have arterial hypertension along with diabetes mellitus as a manifestation of hypertension or atherosclerosis of the renal arteries. Unlike diabetic glomerulosclerosis in hypertension, nephrotic syndrome does not develop, and changes in the fundus vessels are significantly different from diabetic retinopathy. The diagnosis of atherosclerotic lesions of the kidneys is reinforced by the presence of atherosclerosis of another location and is clarified with aortography, which makes it possible to detect a narrowing of the lumen of the renal artery.

Diabetic glomerulosclerosis must also be differentiated from chronic diffuse glomerulonephritis, pyelonephritis, renal amyloidosis. This should take into account the absence of a history of diabetes mellitus, as well as the fact that none of these diseases is accompanied with such regularity as retinopathy and microangiopathy of the extremities, like diabetic glomerulosclerosis.

Analysis of the causes of death in patients with diabetic glomerulosclerosis reveals the following pattern: patients who have not attained 50 years of age die mainly from uremia or chronic circulatory failure developing in the azotemic stage of nephroangiopathy. In the older age group (after 50 years), the main cause of death is cardiovascular lesions – myocardial infarction, cerebral stroke, diabetic gangrene, chronic circulatory failure (N. F. Skopichenko, 1974).

In patients with diabetic glomerulosclerosis, treatment depends on the functional state of the kidneys, the severity of the disease, the presence of complications. In the early stage, while the functional capacity of the kidneys is preserved, the treatment is based on measures aimed at the possible compensation of diabetes mellitus. In the future, therapy is aimed at eliminating or alleviating individual syndromes – hypertensive, nephrotic, azotemic, anemic, etc. (V. G. Baranov, N. F. Skopichenko, 1973). It is also necessary to consider the possibility of layering diabetic glomerulosclerosis infection of the kidney and urinary tract.

The diet in the treatment of diabetic glomerulosclerosis should be mainly hypocaloric, relatively rich in carbohydrates and poor in fats (30-50 g per day) with a restriction of cholesterol-containing products and their replacement with vegetable oil. Such a diet is prescribed based on the fact that an excess of animal fats in the diet of diabetic patients contributes to the development of vascular complications. It is necessary to strive for the normalization of the body weight of patients with diabetes, given that obesity is one of the most important risk factors for diabetic microangiopathies. Due to the pathological effect on the vessels, not so much hyperglycemia, as sharp fluctuations in blood sugar levels, fractional, five-, six-fold feeding of patients is offered, ensuring a more uniform blood sugar level during the day. Due to the hypersensitivity of patients to insulin, it is recommended that its fractional administration and two meals be taken after each injection (after 15-20 minutes and 1.5-2 hours). Perspective is the mode of insulin therapy, which is closest to the physiological rhythm of insulin secretion, using injection devices such as “Novo Рeu”, the biostator apparatus (A. S. Efimov, 1989).

In connection with significant disorders in patients with diabetes mellitus, the rheological properties of blood, pronounced hypercoagulation and the development of microthrombosis, re-correctors have been widely used – hemodez, reopoliglyukin in combination with drugs that improve tissue oxygenation (solkoseril), and also reduce the aggregation potential of blood cells (trental, kurantil) ).

Its use in the early stages of tubuloglomerular disorders can serve as prevention of nephroangiopathy (3. S. Mehtiyeva, 1989).

Fundamentally new drug in the treatment of vascular lesions in diabetes is izodibut – an inhibitor of the enzyme aldoreductase, responsible for the conversion of intracellular glucose to sorbitol; appointed in tablets of 0.5 g 3-4 times a day for 2 to 6 weeks (I.M. Kakhnovsky, T.V. Koroleva, 1990). The drug was developed by the Kiev Research Institute of Endocrinology and Hormone Chemistry. From the methods of non-pharmacological therapy, hyperbaric oxygenation, which improves the functional state of the kidneys, is effective (TA Malkova, 1990).

In case of arterial hypertension, antihypertensive drugs are used (dopegit, gemiton, clophelin, reserpine, etc.). Saluretics in combination with aldosterone antagonists (aldactone, veroshpiron) are recommended to combat edema. When taking thiazide drugs, caution is necessary, as with prolonged use they worsen the course of diabetes mellitus by reducing the insulin activity of the blood. Of the diuretic, preference should be given drugs anthranilic acid (furosemide, lasix). In severe nephrotic syndrome, plasma or albumin transfusions are indicated.

Alkaline mineral water, fruit juices, gastric lavage, intravenous drip of 5% sodium bicarbonate solution, hemodez are used to reduce acidosis in the development of chronic kidney disease. With the development of CPP, not corrected diet and symptomatic agents, patients are transferred to hemodialysis. In diabetic glomerulosclerosis complicated by urinary tract infection, it is necessary to prescribe broad-spectrum antibiotics, if necessary in combination with sulfonamides, nitrofuran preparations.

It is carried out by early detection and treatment of diabetes mellitus, careful monitoring of blood sugar levels and elimination of sharp fluctuations in glycemia, which is achieved by repeated meals with the selection of adequate doses of insulin or other sugar-reducing agents. Patients need appropriate diet therapy, proper employment. Careful prevention of urinary tract infection is also required.

Clinical supervision of patients with diabetic gromerulosclerosis is carried out by the district physician general practitioner together with the endocrinologist. The same amount of research is recommended as with the appropriate form of chronic glomerulonephritis – once every 3-6 months. Special attention should be paid to monitoring blood pressure, sugar in the urine and blood.